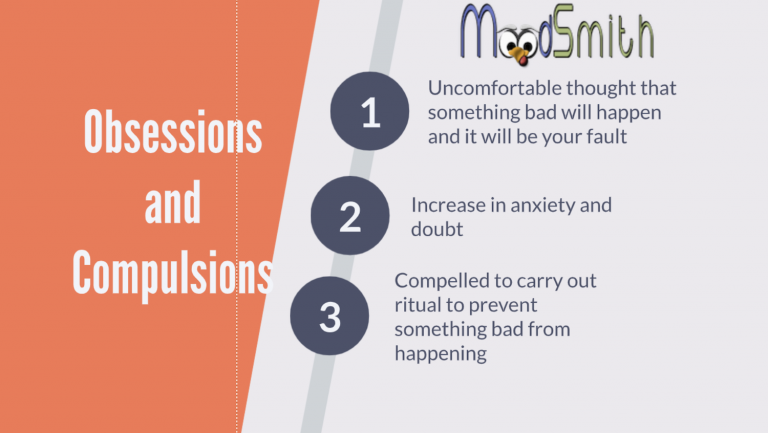 What are obsessions and compulsions?

As suggested in the name, the defining aspect of Obsessive-Compulsive Disorder is having both obsessions and compulsions.

Obsessions are the repetitive thoughts, images or urges that are unwelcome and cause distress or repulsion, shame, guilt or disgust.

Compulsions are all the things you feel compelled to do to ease the suffering caused by the obsessions. They are repetitive actions you undertake to prevent your obsession from happening and thus avoid a feared consequence.

You can see a few examples of obsessions and compulsions below.

People whose obsessions are clustered around checking fear making a mistake or forgetting to do something that could cause harm to themselves or others, and it would be their fault.

For most people with OCD, the compulsions are much more elaborate than the example I gave above.

They can start off quite small, just double checking that everything locked, but overtime this quick check is not enough to ease the doubt created by the obsessions and quite elaborate, disabling rituals can occur.

You might have a specific number of times you check in addition to how you check. You might way the word ‘off’ out loud, a set amount of times. You may take a picture of the locks to ease your doubt when you are away from your home.

People whose obsessions are clustered around contamination are afraid that ultimately they might be responsible for making themselves or someone they care about ill or worse.

Compulsions surrounding contamination can be very complex. It is not as simple as not wanting to touch something that another person may have touched.

A person whose OCD centres around contamination may be mentally tortured by a complex chain of events.

Regardless of the type of obsession, compulsions are carried out to prevent something bad from happening.

I have found people can miss getting the diagnosis they need if they have covert compulsions hidden from view.

Someone attending therapy is not an expert in mental health. In the assessment sessions, they will not announce that they suffer from hidden compulsions, helping the clinician make a diagnosis.

Even though the person wants to be as honest as possible to get the help they need, they probably do not recognise their mental rituals as compulsions.

An example of this is where the person has intrusive thoughts and no visible compulsions. You might recognise this if I give it the label Pure OCD.

In my experience as a psychologist for 20 years, even those individuals who think they have Pure O, always have hidden compulsions such as mental testing or reassurance seeking. 1

How do compulsions start?

Compulsions always have a function; they serve a purpose. Most clinicians working with OCD are familiar with the function of compulsions concerning, for example, avoiding harm.

The person might repeatedly check that they have turned things off and unplugged electrical appliances. However, it would help if you also considered the less visible function of compulsions related to the person’s emotional experience. In this instance, the driving force of the compulsions is that something is ‘just not right.’

For a compulsion to start, you need to have a recurring, persistent thought that is upsetting to you; an obsessive thought. If you did not have the uncomfortable idea, to begin with, you would never have felt the need to neutralise it. Or reassure yourself or prevent something wrong from happening to you or the people you love.

I shall use an example from my practice to help explain this to you.

Case example
The following is an example of how obsessions and compulsions work together using a case study from a client I worked with several years ago. I have changed names and details to ensure anonymity.

I chose this case to use an example, as OCD is rarely as simple as something is dirty. I need to wash my hands.

Her General Practitioner referred Mary, a 39-year-old separated woman, to the service for reporting Obsessive-Compulsive Disorder (OCD) symptoms. Specifically, Mary was having difficulty with a fear of contamination from faeces. This was the main reason for her referral. Mary recalls being concerned about waste paper bins as she stated that ‘these contain nappies’.

Mary’s symptoms started after find out her husband had been having an affair. Mary recalls being concerned about waste paper bins as she stated that ‘these contain nappies’.

Mary and her husband have been separated for 11 years. While they were living together as husband and wife, Mary described telephoning her husband often to reassure herself that he had arrived at work safely.

She stated she was concerned that something might happen to him, causing her to worry about coping alone.

Most of her adult life, Mary was afraid that she would be abandoned. She was scared she could not cope alone. This fear manifested itself in her repeatedly telephoning her husband to reassure herself that nothing had happened to him.

This need for reassurance was exacerbated by Mary’s thoughts that she could not cope alone if anything happened to him. For those of you interested in Schema Therapy we also discovered an abandonment schema based on dependence 2 (Young and Klosko, 2019).

The OCD, in terms of her fear of contamination, which was the reason she was referred to me by her doctor, was a clear visible compulsion. At the beginning of this article I explained, people may not get the help they need if less visible compulsions are missed, and we discovered that the compulsions Mary found most difficult were her hidden mental compulsions that stemmed from her fear of being left alone.

As you can see from the above example, obsessions and compulsions can be complex. Still, there is always a reason you perform rituals.

2. Young and Klosko 2019 Reinventing Your Life

If you would like my help, please see my online courses.
View courses