Exposure response prevention will help you with intrusive thoughts. Before going any further, I think it is helpful to mention classical conditioning1 briefly. Your thoughts are problematic because they are associated with something unpleasant such as anxiety, disgust, repulsion or shame. If your thoughts could not trigger such pleasant emotions, you would not have felt the need to read this article.

For example, someone might have the intrusive thought that they have done something terrible in the past. This thought makes them experience worry and anxiety. To reduce the fear and anxiety, they feel compelled to repeatedly check their history to ensure they did nothing wrong. The compulsion is the mental review of the past to ensure you did nothing wrong.

Things to try now. Before reading any further, take a moment and think of things you do to reduce the anxiety that your intrusive thought triggers. This could be mentally reviewing events or seeking reassurance. Then ask yourself, does that help? Your answer might be yes; it helps. Still, I want to say that it only helps short-term; otherwise, your intrusive thought would be gone, and you would never experience it again.

Learn how to do ERP yourself

This strategy only helps short-term because, according to classical conditioning, the compulsion is maintained through negative reinforcement.

For example, a person has the intrusive thoughts that they could hurt someone with a curtain tie. This thought creates fear and anxiety. They immediately remove all curtain ties and similar items from their home. The compulsion to remove the ties, made them feel they were preventing something negative from occurring.

Next time the person has a similar uncomfortable thought, they repeat the compulsion and remove anything rope-like from their home, as this helped last time and strengthened the compulsion.

You get rid of the uncomfortable and negative emotions you experience, which primes you to carry out the compulsion next time you get the intrusive thought.

What Is Exposure Response Prevention?

Let’s say you were cooking dinner with your partner and holding a knife, and you had the thought, “I could stab him.” Undoubtedly, this will not make you feel good, but the idea would lessen if you could carry on cooking dinner.

However, if you started analysing the thought while cooking, you could become more aware of the knife and begin to feel bad. You might question where the idea originated. If the thought stays with you, you might add meat to the initial thought by thinking, “am I a bad person? Do I not love my partner? Am I capable of hurting someone?”

Over time you might feel compelled to avoid cooking or cooking when someone is present, or you might put the knives out of harm’s way. These compulsions do not solve the problem; they only lessen the anxiety for some time.

The goal of ERP is to expose you to uncomfortable thoughts without ritualising or performing a compulsion, where you can carry on cooking without hiding knives.

Why is this better than performing compulsions?

The compulsions are the problem, not the thought. Continuing with the example above, having an intrusive thought, what if I hurt him, is not the problem. The problem is acting as if it were true by changing your behaviours and hiding knives.

Being able to have the unwelcome thought and manage your anxiety in a controlled way affords you the opportunity of seeing that you do not act on the thought, thereby making compulsions obsolete.

Once the compulsions are obsolete, there is nothing left to maintain your intrusive thoughts.

All the thoughts are obsessions, and the things you do, such as not cooking with another person, are compulsions. Hopefully, I’ve explained it in a way that you might be open to the idea that the thought in itself is not the problem; instead, the problem is what you do next.

How does ERP help with intrusive thoughts?

ERP helps you by getting you to gently expose yourself to your thoughts instead of avoiding them and facing your thoughts without carrying out compulsions.

Many mental health conditions are maintained and exacerbated by avoidance and the things you do, such as your compulsions to lessen anxiety.

I appreciate that the thought of ERP at this early stage might make you apprehensive, but that is because you see your thoughts as threatening, and your compulsions ease that a little.

For example, if you had the thought while cooking, I could hurt someone, the idea that you could not either stop cooking or hide knives seems like you are in a precarious position, but that is because you have not yet learnt that neither you nor the other person is in danger; there is no threat.

When you keep carrying out compulsions, such as avoiding knives, these behaviours keep reinforcing a threat. Exercises undertaken during ERP teach you there is no threat, and the association is eliminated.

How to get started with exposure

Exposure-response prevention involves exposure. Exposure to your unpleasant thoughts is undertaken in a controlled and manageable way.

Up until now, you might have managed by avoiding your triggers, but the key to success is gaining control. Intrusive thoughts pop into your mind without warning, and you try to push them out. This time there is a warning, as you are in control and decide to have the thoughts on purpose.

To start, it means accepting and tolerating a certain amount of anxiety. However, in my private practice, I have worked with clients who astounded me by experiencing very little stress once they fully understood how their thoughts worked. For them, the threat was gone.

Examples.
The following example comes from previous work I undertook with a client and shall help explain how to get started with ERP.

Her intrusive thoughts fell under the theme that something terrible was going to happen. Whenever her husband left for work, she made him text to say that he had arrived safely.

The thought was, he had been in an accident, and her compulsion was ringing and texting to make sure he was safe.

We practised this in session by encouraging the thought that something terrible had happened. This practice worked well as her husband was not in session with her, and helped to elicit thoughts such as, he could be in a crash.

I asked her how she felt, and she was anxious and worried and wanted to carry out her usual compulsion of texting. I asked her what happens when she texts. She gets more nervous waiting for the reply, but relief once he responds.

Things to try. Ask yourself the same question, what happens when you cannot carry out your compulsion?

Rather than text, my client was encouraged to try

Although difficult at first, eventually, your brain replaces the threat with less anxiety. Practising exposure without responding with compulsions, according to Foa & Kozak, (1986)2 allows you to habituate to the thought. Habituation to the thought means that anxiety has been eliminated.

If you want to try ERP to help with your intrusive thoughts, you first have to list all your thoughts and then rate each thought on a scale of 1-10, where one means very little anxiety, and ten is highly anxious.

Next, organise your list with the least anxiety-provoking thought at the top, as this is where you shall begin your exposure work.

I encourage you to practice exposure, not only through planned practice but also as opportunity presents. For example, you may plan to practice several times per day, but if the intrusive thought pops into your head in the interim, see this as an opportunity to practice.

ERP sounds simple in that all you have to do is not react to your thought with a compulsion, but it takes practice.

It is important not to avoid. For example, I worked with another client who had intrusive thoughts that it was possible that they had touched a child in the past and had forgotten about it.

She coped with this thought by seeking constant reassurance and mentally replaying all events that involved children. She also stopped bathing and dressing her children.

As part of her ERP treatment, she was to dress her children in the morning and, when the intrusive thought occurred, to continue getting her child ready without either,

looking away, or
calling her husband to take over.

To manage her urge to carry out compulsions, she was taught to tell herself, this is just and thought and focused on, for example, putting her child’s arm through the armhole on their jumper.

Afterwards, she felt compelled to mentally replay the event to ensure she did not look or touch her child inappropriately. This behaviour is also a compulsion, and she was instructed to practise mindfulness or distraction.

In the examples I have used so far, it is important to stress that ERP helps with all forms of intrusive thoughts.

ERP helps with HOCD as you will learn to allow your intrusive thoughts regarding your sexuality to come without carrying out compulsions such as checking you are still attracted to members of the opposite sex.

Similarly, if your thoughts are focused on your relationship, you will learn not to react to them.

Final words.
Compulsions maintain your intrusive thoughts. Avoidance and reassurance seeking keeps the cycle going. Exposure Response prevention eliminates the compulsion through a process of new learning, and it is this habituation that helps you recover from intrusive thoughts. 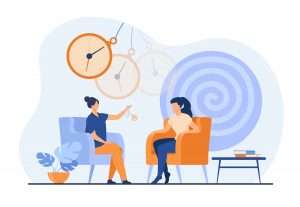 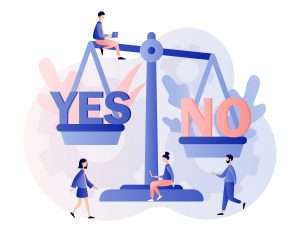 Cognitive biases and their role in intrusive thoughts